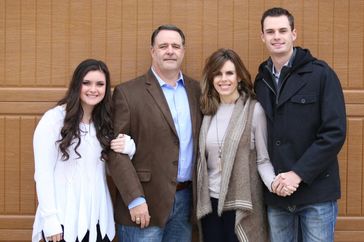 I grew up in Kirbyville, Texas and graduated high school from there in 1983. Both of my parents were educators - my mother a long time second grade teacher and my dad a building trades teacher and later the tax assessor-collector for Kirbyville ISD.
My wife, Jeri, is an educational diagnostician, and we have two children - Justin and Jaci.

​I have a bachelor's degree in history and physical education (1987) from Lamar University in Beaumont and a Masters degree in administration (1993) from Sam Houston State University in Huntsville.  I earned my Doctorate in Educational Leadership (2001) also from Sam Houston State. My doctoral dissertation was a study on the characteristics of Texas superintendents, their communities, and their effect on superintendent tenure.

I have been honored by Who's Who in Executives and Professionals, published articles in the Texas Lone Star and Texas Coach magazines, have an honorary FFA degree, and was honored as Citizen of the Year in 2008 by the Rusk Chamber of Commerce. I have also been nominated four times for  Superintendent of the Year - twice in Region 7 and twice in Region 11. Upon my retirement from Granbury ISD, I was given the “Key to the City” by Mayor Nin Hulett.
In my spare time, I enjoy traveling and spending time with my family, playing golf, SCUBA diving, and various other outside activities.